Grabovac is a typical village in Dalmatian hinterland. It is located on the north side of the Mt Biokovo, along the state road Šestanovac-Vrgorac. Ongoing work on the tunnel breakthrough St. Ilija through the mountain and completing the same from Baška Voda until Grabovac will enumerate about 12 km. The place as such is ideal for rest and relaxation from the daily rush and noise. For emergency supply there is a store and has a post office. All the larger and more demanding requirements can be found in Šestanovac.
Of the important things we emphasize:
- The Hunter Museum, the owner is Ante Dundić from Goričaj
- The cave along the highway route which isn't yet in use duet to conservation examinations

For nature lovers, behind Makarska there is the nature park Biokovo, the highest mountain in the central Dalmatian region, on which trekking excursions are organized. Excursions: to the nature park Biokovo, Split, Trogir, Solin, Dubrovnik, the canyon of the river Cetina with rafting facilities, the National park Krka, boat trips to the islands of Hvar, Brac and Korcula.

Baska Voda - only 10 km away from Makarska, is the most visited and the oldest summer resort of Makarska Riviera. Afforested landscape, gravel beaches, clean sea and quality hotel and apartments` offer are the most successful ambassadors of rich natural and tourist value of the place. Historical and cultural heritage which goes back to the Bronze Age is today presented in the exhibition of the Archaeological Museum and the Town Museum of Baska Voda. Cultural and entertaining event “Baskovodsko ljeto” (Baška Voda Summer Festival), apart from the vast gastronomic offer of autochthonous specialities, guarantees good time for all the participants. 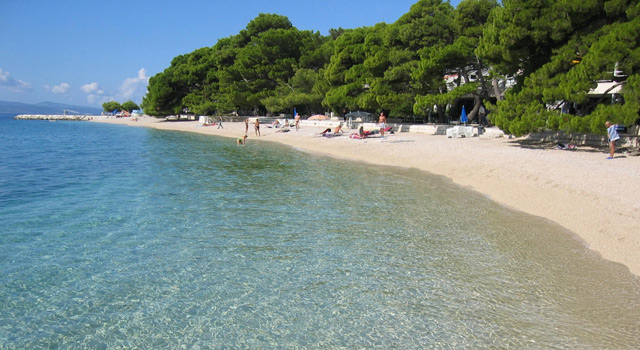 Map of Dalmatia Map of Croatia

The Sinjska alka is an equestrian competition which has been held every first Sunday in the month of August in town of Sinj, Croatia since 1715, commemorating the victory over Ottoman Turkish administration. It consists of an equestrian competition, in which various horsemen attempt to aim their lances at a hanging metal ring (alka) at full gallop. In 2010 it has been inscribed in UNESCO Intangible Cultural Heritage Lists.

Shell museum in Makarska - This interesting museum is situated within the convent of the Blessed Virgin Mary and it was founded in the year 1963. The museum was founded after much research and a long period of collecting shells from all over the world. Today it is labelled a cultural monument with over 3000 samples of shells from the Adriatic, tropical and subtropical seas. These shells are very attractive due to their interesting colors and shapes.

The middle part of Dalmatia is situated between Primosten in the north and the fertile valley of the river Neretva in the south. The capital of the region is Split, which originates from the time of Roman emperor Diocletianus, whose palace is still today the most important monument in the town. In front of Split is located the island Brac with its Vidova gora (the highest hill in the Adriatic islands) and the “Golden Horn”, probably the most beautiful beach in Dalmatia. Between the place Brela and the river Neretva is located the “Makarska Riviera”, considered by many people to be the most beautiful part of the Croatian coast with its wonderful pebble beaches.

Villa Olka is located in Croatia, in Midle Dalmatia.

All rates are in Euro
tax is included
Deposit 500 €